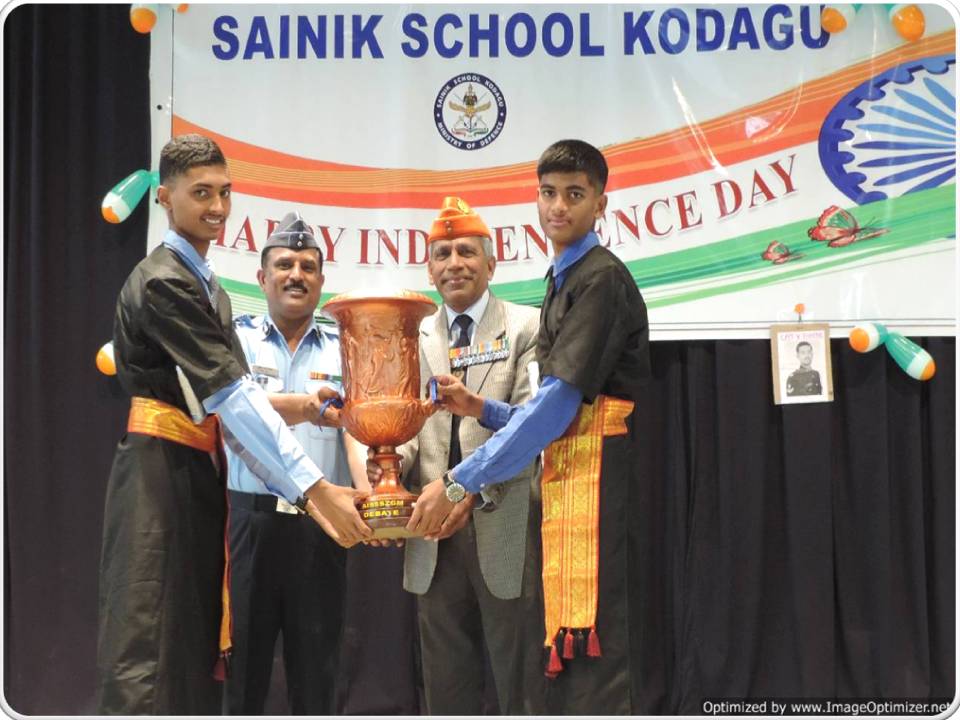 Independence day was celebrated with pomp and show at SainikSchoolKodagu. Gp. Cpt R R Lall unfurled the national flag and inspected the parade. In his independence day address he said that the cadets have put up an excellent march past and appreciated the cadets for their immaculate turn out.

The reviewing officer pipped the epaulettes to the Cauvery house appointments. On this occasion sweets were distributed to all the cadets and employees.

To celebrate the occasion, a cultural show was put up. The chief guest for the function was Lt. Gen R Halagali AVSM, VSM, SM (Retd). Amidst the resounding applause the chief guest gave away the trophy of south zone debate competition winners. In his address he advised the Cadets not to cheat, not lie or to steal.  He also said to take the best out of teachers and improve their talents.

The chief guest was impressed by the way the school is progressing. 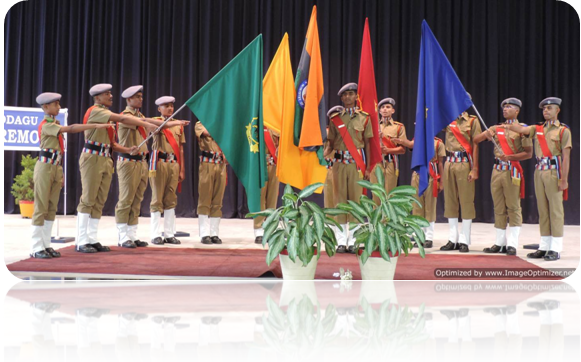 Grp Capt R R Lall, the Principal presided over the ceremony as a Chief Guest. He conferred the rank badges to the meritorious cadets who were happy to take over their duties. Cadet Punith took over the charge as School’s cadet Captain where as Cadet Shivaraj, as the School Adjutant. Cadet Punith, the newly appointed Cadets’ captain administered the oath to Prefects of the school and houses.

The School Appointments took a Solemn oath to uphold the school motto of Valour, Determination and Honesty in high esteem and discharge their duties to the best of their ability and trust bestowed on them. These School Appointments are role models for the younger ones and help the teachers in conduct of school activities.

The Chief Guest was greatly impressed by the solemnity and conduct of the swearing-in ceremony of the school. In his address during the ceremony he complemented the cadets, their parents for getting chosen for the responsibilities. The Principal advised the cadets to have a  vision and do the the needful to transform those visions to reality, believe in oneself,    Understand the juniors and their requirement. He also brought out the importance of confident communication. He opined that  the practical and realistic firm approaches brings in better results. The programme culminated with vote of thanks proposed by Cadet Pavan Thimmayya. Cadets and other staff members were present on the occasion. 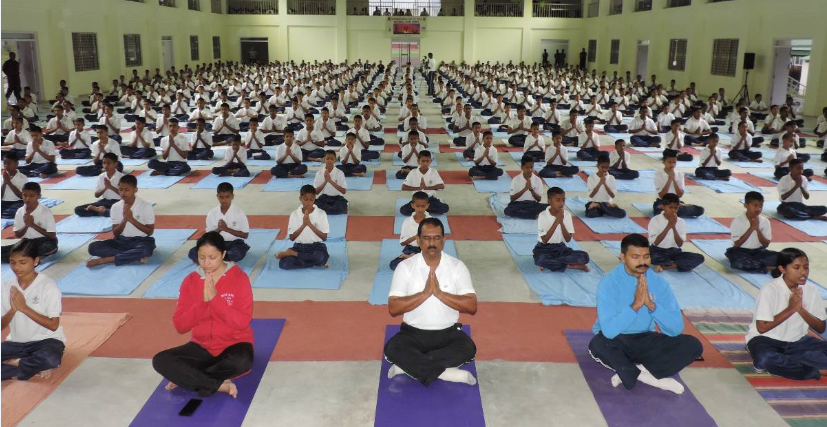 The International Yoga Day was   celebrated on 21st June to bring peace,  harmony, happiness and success to  every soul in the world. Kodagian fraternity in co-ordination with NCC Wing of Sainik School Kodagu assembled at 6.00 hrs in Multi-purpose Hall to en-cash a great opportunity to imbibe the value of discipline. Yoga is a mental, physical and spiritual practice that needs to be carried every day.

Cadets got the chance to know how yoga embodies unity of mind and body. The students of classes VI – XII with the teachers performed Yoga between 6.30 am and 7:30 am.

The programme started off with different yoga postureslikeVrikshasana,Uttaanaasana, Trikonaasana, Bhadrasana, Shashankaasana, Bhujangasana, Pawana Muktaasana and culminated with Pranayama and meditation. Prayers were recited before and after the programme. Heartfelt thanks to our Prime Minister, Mr. Narendra Modi for giving an opportunity for schools to celebrate the International Yoga Day. The school is also thankful to CBSE for initiating this for inculcating Yoga as a part of the syllabus.